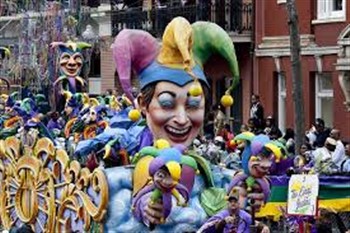 Experience the excitement, energy, food, and parades of New Orleans during Mardi Gras season. See the floats before the big party, learn Creole cooking, and visit one of the nation's best rose gardens.

Welcome to New Orleans, Louisiana, America’s jazz capital. Meet your Tour Manager in the hotel Lobby at 6:00 p.m. for a transfer to our welcome dinner and cooking demonstration at the New Orleans School of Cooking. Located in a renovated molasses warehouse in the heart of the French Quarter, you will learn the basics of Louisiana cooking from well-known local chefs. Creole/Cajun experts teach New Orleans specialties such as Gumbo, Jambalaya and Pralines, and season them with history, trivia and tall tales. You’ll be treated to a wide range of local classics and get to enjoy them in sumptuous feast. It's a "ga-ron-teed" good time for all. After dinner, feel free to enjoy the French Quarter on your own. Meal: D

We begin with a narrated tour of New Orleans. See the sights you’ve heard about for years such as the historic French Quarter, the beautiful Garden District, the colorful River Walk along the Mississippi and famous Bourbon Street. See New Orleans as the city prepares for the biggest celebration of the year, Mardi Gras, with its colorful costumes, parades and parties. In the afternoon we pay a visit to the National WWII Museum. Designated by Congress as the country's official World War II Museum, this remarkable attraction illuminates the American experience during the WWII era. Celebrate the American Spirit as you experience moving personal stories, historic artifacts and powerful interactive displays. From the Normandy invasion to the sands of Pacific Islands, the Museum salutes the optimism, courage and sacrifice of those who won the war and changed the world. Meal: B

This morning, learn what goes into the making of the Mardi Gras parade floats. Since 1947, the artists of Blaine Kern Studios have been bringing Mardi Gras to life, creating many of the parade floats, from concept through completion. The colors, the lights, the music, the “joie de vivre” is all in one magical place, Mardi Gras World. You’ll get a behind the scenes look at the world’s largest fleet of carnival floats and see everything that goes into making Mardi Gras such an international phenomenon. Later, experience the fun and festivities of a Mardi Gras parade and cheer on the “Krewes” who sponsor the floats. Delight in their ornate costumes and royal courts and try to catch some of the gold, purple and green beads thrown at you from the floats. Be sure to sample Kings Cakes, a traditional Mardi Gras treat! Meal: D

Resting proudly along the gulf coast sits Beauvoir Mansion, the last home of President Jefferson Davis. Built by a wealthy plantation owner the mansion was completed in 1852 and Davis purchased it a number of years later to pen his Civil War memoirs. Today, the home houses Davis’ Presidential Library as well as the Beauvoir Confederate Cemetery which contains 771 graves of Confederate veterans and their wives. Next, we arrive at the fabulous Beau Rivage Resort and Casino, a waterfront resort which means "beautiful shore" in French. Enjoy two glorious nights at this luxurious retreat where you can shop in the Promenade, dine in the many restaurants providing a variety of local and international cuisine, enjoy entertainment or intimate nightclub gigs. You can also put Lady Luck on your side in the casino with table games, video poker and 2,100 slot machines. Meal: B

Today we visit Bellingrath Gardens, one of the South’s most beautiful gardens. See why this delightful garden was named the 2004 Top Public Rose Garden by the All-America Rose Selections. Experience the Bayou Boardwalk, marvel at Mirror Lake and the Asian-American Gardens. Tour the Bellingrath Home, with its original furnishings and decorative arts. Built in 1935, the 10,500 square foot home was designed by prominent architect, George B. Rogers in a style he called “English Renaissance.” Later, we return to The Beau Rivage for a sumptuous farewell dinner. Meals: B, D