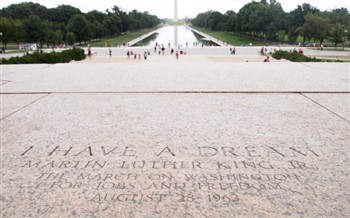 Immerse yourself in the powerful and moving history found on the African American Heritage and Culture Tour.  Featuring the National Museum of African American History and Culture, Howard University, the Frederick Douglass Home, and The Harriet Tubman Trail which forever changed our future and shaped the country we live in today.

*Itinerary is subject to change or be modified where reasonably required at any time. Itinerary changes may be necessary as a result of unforeseen circumstances, operational concerns, or concerns for your health, safety, enjoyment or comfort.

7:00am Enjoy breakfast included this morning at the hotel.
8:00am Depart with GUIDE.
*Stop at The Martin Luther King, Jr. National Memorial. The long awaited memorial utilizes landscape elements to powerfully convey three fundamental and recurring themes of Dr. King's life: justice, democracy and hope. The memorial is a quiet and receptive space, yet at the same time, powerful and emotionally evocative, reflecting the spirit of the message Dr. King delivered and the role he played in society. The King Memorial is intended to be personally transformative for visitors, building a sense of commitment to the promise of positive change and active citizenship.
*Stop at The Vietnam Veterans Memorial. This privately funded memorial has drawn millions who have come to touch the over 50,000 names, make pencil rubbings and leave flowers, letters, flags and personal mementos.
*Stop at The Lincoln Memorial. Overlooking the Reflecting Pool, this memorial was patterned on a classic Greek temple. Inside, inscriptions from his Gettysburg Address and Second Inaugural Address flank the 19-foot marble statue of our 16th President. Stand on the spot where Martin Luther King Jr. delivered his famous "I have a Dream" speech.
*Stop at The Korean War Veterans Memorial. The triangular field contains nineteen ground troopers, clad in foul weather ponchos, fully equipped for battle. Representing those who supported the ground troops are hundreds of faces etched on a polished granite wall.
*Drive by Freedom Plaza. Originally known as Western Plaza, the plaza was renamed in honor of Martin Luther King, Jr., who worked on his "I Have a Dream" speech in the nearby Willard Hotel. In 1988, a time capsule containing a Bible, a robe, and other relics of Dr. King's was planted at the site. It will be reopened in 2088.
*Drive by the Willard Hotel where Dr. Martin Luther King, Jr. completed his I Have a Dream speech.
10:00am Visit the African American Civil War Museum. In January 1999, the Civil War Memorial Museum opened to the public. Using photographs, documents and state of the art audio visual equipment, the museum helps visitors understand the African American's heroic and largely unknown struggle for freedom. The African American Civil War Museum honors and examines the African American's heroic struggle for freedom and civil rights.
*See the African American Civil War Memorial. At the center of a granite-paved plaza encircled on three sides by the Wall of Honor is the Spirit of Freedom sculpture. Unveiled on July 18, 1998, the sculpture stands ten feet tall and features uniformed black soldiers and a sailor poised to leave home. Women, children and elders on the cusp of the concave inner surface seek strength together. Designed by Ed Hamilton of Louisville, Kentucky, this is the first major art piece by a black sculptor to be placed on federal land anywhere in the District of Columbia.
11:00am Depart on an African American Heritage Tour of The Shaw Neighborhood. The Shaw was named after Robert Gould Shaw who was the white commander of the famed black 54th Massachusetts Regiment.
*Drive by the Thurgood Marshall Center, located in the historic Twelfth Street YMCA building, the former home of the first full service YMCA for African Americans in the nation. It was designed by one of the nation's first African-American architects, W. Sidney Pittman, son-in-law of Booker T. Washington and was built largely by African-American artisans.
*Drive by Howard University, one of the most prestigious, historically black universities in the country.
*Drive by Ben's Chili Bowl, with its high-arched ceilings, character and plenty of history. Built in 1909, the building first housed a silent movie house, the Minnehaha Theater. Later, Harry Beckley, one of D.C.'s first Black police detectives, converted it into a pool hall before the Ali's bought it on August 22, 1958 and Ben's Chili Bowl was born.
*Drive by Lincoln Theatre. This theatre has just completed renovations that restored it to the magnificent facility originally known as "Black Broadway" between 1920 and 1950.
*Drive by Bohemian Caverns. In 1926 a little jazz club was opened in the basement of a drugstore located at 11th and U St. called Club Caverns. Club Caverns soon became famous for their floor and variety shows. Washington's elite would come in droves dressed in their most formal attire, to be entertained by the likes of Duke Ellington and Cab Calloway. The Caverns has brought a great many artists to its stage, but it was the immortals that built this house and our legacy: Washington's Son Duke Ellington, Cab Calloway, Billy Holiday, Sarah Vaughn, Louis Armstrong, Ramsey Lewis, Less McCann, Miles Davis, Shirley Horn, John Coltrane, Eric Dolphy, Wynton Marsalis, Thelonious Monk, Charles Mingus and Bill Cosby.
*Drive by Martin Luther King, Jr. Memorial Library to see the King Mural by Don Miles, a pictorial documentation of the life and legacy of Martin Luther King, Jr.

*Drive by Metropolitan AME Church, roots of which date back to 1822 when a group of dissatisfied African Americans broke away from predominately white church and later, formed the first African Methodist Episcopal Church in 1886. Its parishioners have included Frederick Douglass, and it was the site of his funeral in 1895. Funerals of the first African American U.S. Senator, Blanche Bruce (1898), and civil-rights activist Rosa Parks (2005), were also held here.
Noon Visit the National Museum of African American History and Culture. The NMAAHC is a museum that seeks to understand American history through the lens of the African American experience.
*Enjoy lunch on own while at the museum at Sweet Home Café featured in the NY Times serving southern comfort food from four different regions.
5:30pm Depart.
6:00pm Enjoy dinner included at Texas Jack's Barbecue. A large rustic-modern joint with a woodsy feel serving Lone Star-style'cue and unique sides. Voted #1 Best BBQ restaurant in the Washington D.C. area by The Washington Post - TWICE!
7:30pm Depart.
8:15pm Return to hotel.

8:00am Prior to checking out, enjoy breakfast included at the hotel this morning. Baggage handling is included.
9:00am Depart.
9:30am Meet GUIDE for an African American Tour of Baltimore.
The tour includes the Baltimore Civil War Museum where Henry "Box" Brown will describe his famous journey to freedom. Next we'll stop at Douglass Place and learn about Frederick Douglass's life here as a slave. Continue with a visit to the Orchard Street Church, Baltimore's home of the Underground Railroad, where we will meet Harriet Tubman.
12:30pm Enjoy lunch own on in Baltimore's Inner Harbor.
2:00pm Visit the Reginald F. Lewis Museum. Enjoy a docent led tour followed by free to time to explore exhibits. Lawyer, entrepreneur, philanthropist, Chairman, CEO, husband, father, son, brother, nephew, cousin, friend-Reginald F. Lewis lived his life according to the words he often quoted to audiences around the country: "Keep going, no matter what." The museum's mission is to be the premier experience and best resource for information and inspiration about the lives of African American Marylanders.
4:30pm Depart for home.
7:30pm Approximate arrival back to our office